It is quite often that stainless steel developed porous metallic lacy structure during pitting corrosion. Steel pits are partially covered by remaining passive film.  The passive film covering the pit is not existed any more. The passivation layer in the pit is not an effective barrier for the diffusion. 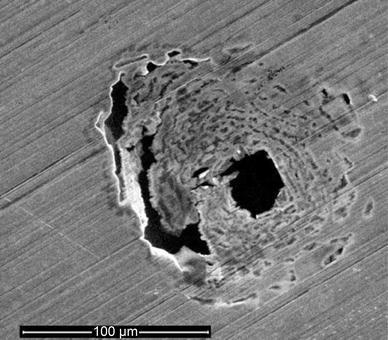 Newman et al developed a model to demonstrate the initiation, developing and growth of pits in stainless steel. During initial stage (a), the passivation layer of stainless steel was destroyed, in which a pit is initialised. However, the mouth of the pit became re-passivated, while the open pit is under the corrosion attack (stage (c) In such a way, undercut is developed under the re-passivating film (stage (d)). Within the pit where the concentration remains sufficiently high, the pit will continue to dissolve and grow under the passivated film. In this process, the open mouth region, due to easy access of oxygen, may be sufficient to produce fresh passivating film (stage (e)).  This process is repeating itself to result in the lacy pattern of corrosion pits in stainless steel surface.