A magnetic flux leakage (MFL)  inspection is the type of in-line inspection technology in which a magnetic saturation is induced in the pipe wall between two poles of a permanent strong magnet. The pipe wall is magnetised by using this magnet. Anomalies affect the distribution of the magnetic flux in the wall, by which it is used to detect and characterize anomalies accordingly. Any metal-loss in the pipe wall will cause the induced magnetic flux leakage, which can be monitored using a detector and hence metal-loss defects can be identified and sized. MFL can be utilised by both liquid and gas pipelines. 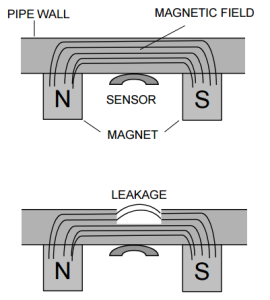 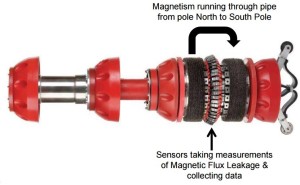 MFL is considered as a metal loss tool since significant of leakage is required for the detection. NACE SP 0102 has outlined the anomalies and features are likely to be detected by MFL.