External corrosion is a material deterioration process in which environment playing an important role. In oil and gas production, atmosphere, water  and soil are three major influencing factors on external corrosion. 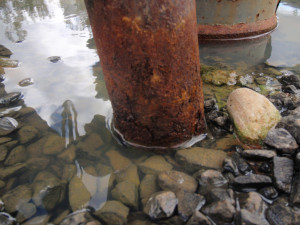 Metal in water usually suffers more severe external corrosion.  The water may either pick up the gaseous contaminants from atmosphere or dissolve pollutants from minerals. It also renders the benign environment for microbial growth.  The contributing factors of the corrosivity of water  include: