Asset owner and corrosion engineer need to be vigilant to the sources of DC stray current including other pipeline cathodic protection units, HVDC transmission lines, DC railway and trams, solar farms, smelting plants, electroextraction plants etc. corrosion engineer should also be aware of  latent sources such as telluric effect, strong magnetic deposit. Once suspected source of DC stray current is identified, further detailed monitoring should be planned to identify the magnitude of interference, assess the risk level to pipeline integrity and mitigation requirements.

The principal anodic areas along the pipeline should be located. Sufficient cathodic protection current should be applied to cause a net protective current from the electrolyte to the pipe surface. The structure-to-electrolyte potential measurements by using close interval potential survey (CIPS) technique are performed on piping that is not cathodically protected. The structure-to-electrolyte potential survey, when used as a tool for locating probable anodic conditions on unprotected pipe, should be conducted by making individual readings at 3 m (10 ft) intervals along the route of the pipe. Probable anodic conditions are indicated at survey points where the most negative readings are determined. It may be desirable to confirm these suspected anodic conditions by making the two-reference-electrode test lateral to the pipe as described for the two reference-electrode method described below. 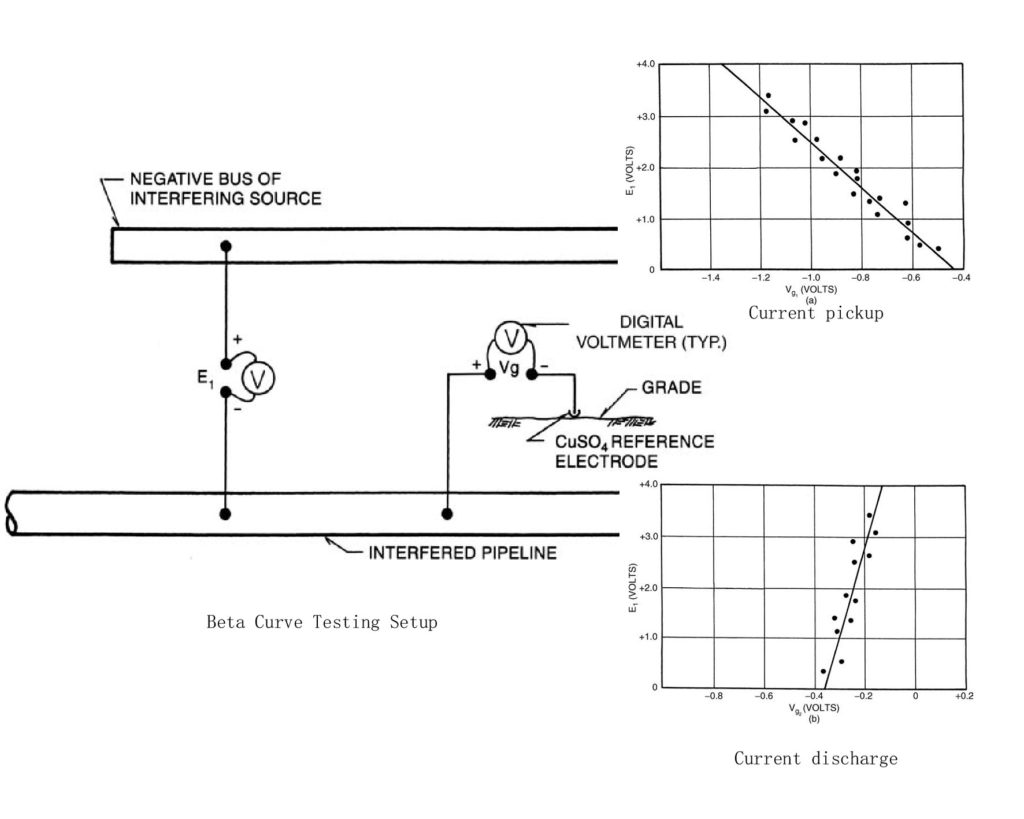 The direct current voltage gradient (DCVG) method, i.e., two-reference-electrode potential survey measures the direction of the potential gradient along the earth’s surface. Measurements should be made at 3 m (10 ft) intervals directly over the centerline of the pipe. This method is used to detect the probable current discharge (anodic) areas along a pipeline as well. However, this method is more appropriate to poor coated and/or bare pipeline. For well coated pipeline, the voltage gradient is not used as a standalone method for identifying stray current pick up and discharge. Suspected anodic conditions and their magnitudes can be confirmed by making two-reference-electrode tests laterally to the pipeline. One reference electrode is placed over the line and the other spaced laterally the same distance as for the transverse measurements over the line. These tests should be made on both sides of the pipe to verify that current is leaving the line.

CIPS after the mitigation

Line Current Measurement after the mitigation

Beta curve confirmation for the slope of maximum of exposure section

Develop the beta curve to identify the most severely affected sections. This is most valuable for the dynamic interference sources, e.g. telluric, DC tram and railway etc.  If the CP unit is operated under auto potential mode, its anode bed may also be taken as dynamic interfering source.